The Toilet Sounds of Aaron Pena 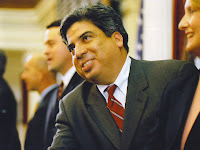 Some people prefer to play petty politics than pass good public policy. That was never more evident than what transpired over the last few days regarding the Innocence Commission bill. I wasn't sure who to believe at first about why the bill died in the House Criminal Jurisprudence Committee, since there were conflicting accounts. I found it hard to believe that any elected official would kill a bill out of pettiness, but then I saw that Aaron Peña had redirected a link to a blog critical of him to this Toilet Sounds website where you can hear the sound of a flushing toilet. It was then that I realized that Aaron Peña was probably not the most high-minded person in the Legislature, so he probably was indeed petty enough to vote for a bill and kill it at the same time.


Apprarently, Peña did not like the criticism from the Edinburg News, including their reposting of an article from the Rio Grande Guardian that quoted Senfronia Thompson, the house sponsor of the bill,

Thompson told the Guardian she had six votes for Ellis’s bill and told Peña that on Thursday. She said that at different times during Friday’s hearing the votes were there to pass the bill out but Peña would not bring it up for a vote. She said it was clear he was waiting for members to drift away.

“I had enough votes for a significant period of time during the hearing,” Thompson said. “If you look at Chairman Peña’s actions this session, it is clear he sent the Innocent Commission bills on a slow boat to China.”

Retaliating against political critics by redirecting links to a toilet sounds website is really not the type of grown-up behavior we should be seeing from the chair of an important House committee. In fact, it's kind of scary and disgusting to think that the Chair of the House Committee on Criminal Jurisprudence has the time to put links to toilet sounds on his blog, rather than doing his real job and maybe reading the text of the Innocence Commission bill, understanding how important it is and making sure the bill got out of his committee in a timely manner.

There has been a lot of speculation in the blogosphere in the past few days about who was responsible for the Innocence Commission bill (SB 263) dying in the House Criminal Jurisprudence Committee. The official death was last Friday when four committee members voted for it and two against it, with three members absent. It needed five votes to pass. Peña voted for it, but now it seems that he first waited to take the vote when other members who supported it were not there in order to ensure that it failed.

The San Antonio Express News wrote an editorial putting the blame on Aaron Peña, the chair of the committee: "The committee has had the bill since April 24. It should not have languished as it did, and that is Peña's responsibility."

After he was criticized for sitting on the bill by a post on the Burnt Orange Report last week, he scheduled a vote on the bill for last Friday. Then, writing on his own blog after the vote, Rep. Peña put some of the blame on the netroots for this disaster.

The much talked about Innocence Commission bill was brought to a vote today as I had promised. Although some refused to believe me that the votes were not there, as I represented, the votes were not there today and it failed for lack of a majority. There has been some pretty irresponsible behavior by a number of individuals who have been following SB 263. I am sorry to say that some bloggers are very much in this group.

The Burnt Orange Report explained their criticism of Peña for bottling up the bill in another post:

It would have been inappropriate for us to ignore this legislation considering it was referred to a committee packed with Democrats and lead by a Democratic Chair (Peña) and Vice-chair, and supported by Democratic leaders in the Senate. Rep. Peña has decided that he will remove his link to us from his site. That's his choice, but we see no reason to engage in such pettiness.

The Edinburg News commented on the deletions by writing:

The Burnt Orange Report has always been loyal to Aaron Peña. Now they're starting to question his Republican ways. So what does Aaron Peña do? He deleted their link from his web site. Another blog named Valley Politics was also deleted.

Expect to see more of this. As time gets closer to run for re-election. More and more blogs will be asking more and more questions. Aaron's theory is just ignore and delete. Lol You can do that on cyber space but reality is going to bite you in the butt.

Then Peña took his creepiest step yet. He decided to redirect the Edinburg News link to the Toilet Sounds website.

DOn't you know? aaron pena is a mutt, a cradick cronie who thinks he did well but only got a chairmanship on a committee with no real legislation comming to it this past session. He used to be president of Tejano Democrats, now he gives speeches endorsing his own uncle tom. aaron is the worst legislature there is. WHy he does not even live in his own district, his campaign finance report looks like a District Attorneys evidence package against a compulsive hot check writer. And his best freind is Hidalgo County Democratic chair Jaun "Spuds" Maldonado! What a pair.