Last week Judge Charlie Baird exonerated Timothy Cole of the 1985 Lubbock rape that sent him to prison. But sadly he was not present during the court hearing to celebrate his exoneration. Because he died in prison 10 years ago. This is the first posthumous exoneration in Texas. Steven Kreytak of Austin American-Statesman reports 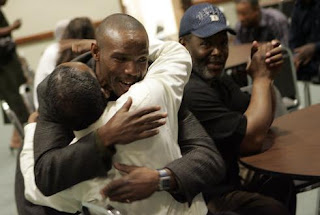 In what lawyers in the case say is a first-of-its-kind posthumous DNA exoneration, a judge in Travis County on Friday announced "to a 100 percent moral, factual and legal certainty" that Timothy Cole did not commit the 1985 Lubbock rape that sent him to prison, where he died in 1999. State District Judge Charlie Baird's announcement brought tears and exclamations of thanks from Cole's family. After court adjourned, Baird came down from the bench and embraced some of them.

"We had to come to Travis County, but we got justice," Cole's brother Cory Session said outside court.

Cole's family members joined their lawyers with the Innocence Project of Texas on Friday morning in calling on the Legislature to pass a bill that would standardize the way police conduct photographic lineups to eliminate any potential police bias. They say they blame Lubbock police for influencing Michele Mallin's incorrect identification of Cole as the man who raped her. Mallin joined Cole's family in petitioning Baird to clear Cole's name after she learned last year that another man had confessed to the crime and that DNA tests linked him to the case. A Lubbock court denied their request.

"The worst conclusion anyone can draw from the Timothy Cole case is this shows the court system works," said Jeff Blackburn , an Amarillo lawyer who is the chief Innocence Project lawyer in the case. "This shows our court system does not work."

During the hearing Friday, convicted rapist Jerry Johnson admitted that he raped Mallin in 1985.

"It's been on my heart to express my sincerest sorrow and regret and ask to be forgiven," said Johnson, who is serving life in prison for two other 1985 rapes in Lubbock County.

After Johnson spoke, Baird asked Mallin and Cole's mother, Ruby Session, whether they wanted to address him.

Mallin stood at a courtroom table and scolded Johnson.

"I love knowing that you are going to be spending the rest of your life in prison," Mallin said. "What you did to me is something you should never do to any woman in any time and any place. I am the one with the power right now, buddy."

Then Session, in sharp contrast to Mallin's remarks, spoke to Johnson calmly and slowly.

"Timothy, all he wanted was exoneration and full vindication," she said.

"I want you to know he was a fine young man. I miss his smile, I miss all the hugs and I miss those salutations in those letters I was getting from him. 'Just a few lines for my favorite young lady.' "

Cole, then a 26-year-old Texas Tech student, became a suspect in a string of rapes near the campus when he approached an undercover police officer who was hoping to draw the rapist on a sting. The women who had been raped, including Mallin, were abducted at knife point while leaving or entering their own vehicles. Cole approached the female officer in his own vehicle, flirted with her and gave his name. Mike Ware, a prosecutor in Dallas who testified about his review of the case, said that Cole never should have become a suspect.

Police took a color Polaroid picture of Cole and put it next to five black-and-white photos in a lineup. Mallin, who testified Thursday, said that she picked Cole and said "I think that's him." When she was told she had to be positive, she said she was, she recalled.

Iowa State University Professor Gary Wells , an expert in eyewitness identification, said that the difference in Cole's photo from the others and the comment about being positive encouraged Mallin's answer.

Senate Bill 117, sponsored by Sen. Rodney Ellis, D-Houston, would require that an officer who administers a lineup not be familiar with the case and not know which lineup subject is the suspect. Under the bill, police would also have to record the event.

A handful of states have adopted similar standards.

Detective James Mason, an Austin police spokesman, said a case detective usually conducts lineups. He said there is no departmental policy on lineups, although it is understood that the detective should not display any bias.

Posted by Hooman Hedayati at 3:13 PM

Congratulations Texas! Hang em’ high right? Maybe if the state wasn’t putting people to death they could release this man and he’d only have lost some ten years of his life instead of being dead.

He died of asthma complications, not the death penalty.

A Plea For Justice: The Timothy Cole Story said...

When I first heard the story about Tim Cole, it may me want to write about it. So I contacted the Innocence Project of Texas, Tim Cole's mother and family, researched the original transcripts and police investigative reports, conducted numerous interviews. Out of this came my forthcoming book titled A PLEA FOR JUSTICE: The Timothy Cole Story, published by Eakin Press, and set for release about May 01, 2010. For more information, go to www.timothybriancole.com

My thanks to this blog for keeping this issue in front of the American public. Sincerely, Fred B. McKinley

In comparison to the accused ones here, who have committed not (!) actual murder but (in german jurisdiction so-called) "death-slay" - either deeds committed in the AFFECT or deeds relating strongly to money-motivated, therefore poverty- or in OTHER different cases also greed-driven crimes.

In cases UNlike Charles Manson, HE was a WANTON, sadist, willful murderer who WOULD HAVE DESERVED the EXCEPTION of the death penalty - but other cases where people wouldn't continue to commit those crimes (and a good testing would lead to a LOT less crimes as well as to A LOT LESS people unneededly being detained!), IT IS THE DEATH PENALTY ITSELF THAT IS MOST ABUSIVE AND SADLY YES: EVEN FASCIST.

on my site wiX.com/TheColumn/Main, under "historic studies", I put some nazi book from 1937 online that shows excutions and torture as if they were NORMAL parts of the state and society.

This pro-death-penalty campaigner shown in the video on the bottom right here LOOKS NOT ONLY LIKE A TOTAL NAZI, but SPEAKS LIKE ONE, to 100%.

What I PERSONALLY WOULD DO? If you ask me:

I would smuggle a supersmall plastic mg into the watchroom, gun down all the people who are about to kill an innocent one, IF I HAVE ESTABLISHED THAT AND ALL LEGAL EFFORTS FAILED!, and organise even other people, bribe policemen inside the prison, to free the man, even if ILLEGALY.

and that is not only my right, but my DUTY AS AN ETHICAL HUMAN BEING!

Obviously he didn't die of the death penalty, right?!
Cole family, my heart crys for you. The loss of innocence...the play on power...may they always remember who has the real power...Our Father...Who Art in Heaven...
God Bless your family and know that you will be with him again!

Mr. McKinley,
You should sell this story and have it made into a movie or a television movie.