Capital Punishment: An Indictment by a Death-Row Survivor 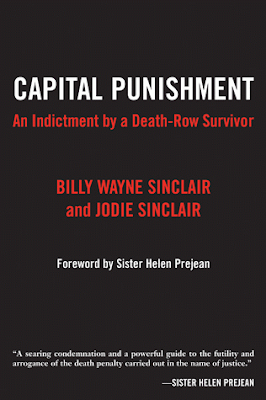 Arcade Publishing has published a book titled Capital Punishment: An Indictment by a Death-Row Survivor by Billy Wayne Sinclair and Jodie Sinclair, with a foreword by Sister Helen Prejean, who calls the book “a searing condemnation and a powerful guide to the futility and arrogance of the death penalty carried out in the name of justice.”

In its landmark 1972 Furman v. Georgia ruling, the U.S. Supreme Court struck down the death penalty as “capricious and arbitrary,” automatically commuting all death sentences to life in prison, but leaving the door open for states to reestablish the procedure. Many states—led by Texas, Georgia, and Florida—took the decision as a challenge and by 1976 reinstated it. Today some 3,300 men and women await their fate on death row.

Billy Wayne Sinclair was just twenty-one years old when he heard a Louisiana judge say, “I hereby sentence you to death in the electric chair,” a sentence resulting from a botched convenience store holdup in which Billy accidentally shot and killed a man. Spared by the 1972 ruling, he spent forty years in the Louisiana prison system, including twenty years in Angola prison, one of the country’s worst—six of those years on death row.

After defeating unfathomable depression, he took up law and soon became a respected jailhouse lawyer. Billy Wayne helped integrate the still segregated Angola prison and exposed rampant corruption within the jail itself and among the state’s high-ranking politicians. He also studied journalism, and his articles won several national prizes, including the prestigious Polk Award. But memories of those six years on death row still haunt him to this day.

In this groundbreaking work, the authors examine the death penalty in great detail, from ancient history to the latest U.S. Supreme Court decisions. Informed by Billy Wayne’s firsthand experience and decades of study, Capital Punishment offers vital information about, and insights into, a subject as heated and controversial today as it ever was.

Billy Wayne Sinclair has won the PEN Award, the Robert F. Kennedy Journalism Award, and the American Bar Association’s Silver Gavel Award. Released from prison in 2006, he is senior paralegal at the John T. Floyd Law Firm. www.johntfloyd.com His wife, Jodie Sinclair, earned her master’s degree in journalism from Columbia University and is director of public relations at a law firm. They live in Houston.

Billy Wayne Sinclair was interviewed extensively as part of a story about an Angola Prison murder case on NPR’s All Things Considered.

Posted by Hooman Hedayati at 8:50 AM