CALL, FAX AND EMAIL THE TEXAS GOVERNOR AND BOARD OF PARDON AND PAROLE ON JUNE 25TH AND 26TH!

On June 26th, Texas is poised to mark a grisly milestone: the 500th execution since executions resumed here in 1982. Texas is bucking a national trend towards the decline of the use of the death penalty – it has been abolished in several states over the last decade, juries meting out death sentences have dropped sharply and support for the death penalty has steadily decreased.

In Texas, over 400 people have been executed since 1995 under two governors alone: with former governor George W. Bush overseeing 152, and Rick Perry at 260. Meanwhile, Texas continues to be rocked by scandals regarding the flaws in our system, starting with the wrongful executions of people who were likely innocent like Cameron Todd Willingham, Ruben Cantu, Shaka Sankofa and Carlos De Luna. Added on to that are cases of racial bias and ineffective assistance of counsel, prosecutorial misconduct and botched forensic investigations.

These problems are, to a greater or lesser extent, factors in every case of this cruel and unusual form of punishment, including in the case of Kimberly McCarthy, who is slated to be Texas' 500th victim of state sponsored murder. Kimberly was convicted in the 1997 murder of her neighbor Dorothy Booth. However this case has the stamp of racist southern justice all over it. There was clear racial discrimination in the jury selection, and she was not provided with adequate legal council, which entitles her to an appeal under a recent Supreme Court ruling Trevino vs Thayer.

We ask the people of Texas to join us in our fight to end this continuing atrocity, and to help save the life of Kimberly McCarthy. We are calling on Texas residents and folks from around the country and the world to register their protest by joining us in a National Day of Action Fax/Email/Phone Jam.

If possible, you can join folks to protest this execution. The biggest protest planned will take place in Hunstville, Texas in front of the prison where death row is on the evening of June 26th, starting around 5 pm. The Texas Death Penalty Abolition Movement has a bus to Hunstville that will leave from the S.H.A.P.E. Community Center in Houston at 2:00 pm on June 26th. Bus tickets are $10.00.

E-mail Texas Death Penalty Abolition Movement at abolition.movement@hotmail.com to reserve your seat. It's possible a bus will also be coming from the Peace Center in Dallas.

People protesting the execution in Austin will gather at the Capitol, on the front steps by the street at 11th and Congress.
Posted by Hooman Hedayati at 9:24 AM 1 comment:

HUNTSVILLE, Texas - Kimberly McCarthy, who claims jury selection in her trial was tainted by racism, is on track Wednesday to become the 500th person executed in Texas during the modern era. The total dwarfs that of every other state. The closest, Virgina, has put to death 110.


If Texas follows through with its plan, Execution Watch will provide live coverage and commentary on the execution, as well as the protests planned outside the death house.
RADIO SHOW PREVIEW - TEXAS’ 500TH EXECUTION
EXECUTION WATCH
Unless a stay is issued, we'll broadcast live:
Wednesday, 26 June 2013, 6-7 PM Central Time
KPFT FM Houston 90.1 and Online...
http://executionwatch.org > Listen
Join the discussion on Facebook: Execution Watch

TEXAS PLANS TO EXECUTE:
KIMBERLY McCARTHY, who has the gruesome distinction of holding No. 500 in the Texas death-penalty lottery. Unless she receives a stay before Thursday night, McCarthy will become the 500th person, and only the fourth woman, executed by Texas during the post-reinstatement era of the U.S. death penalty. The ex-crack addict was condemned in a 1997 robbery-slaying near Dallas. McCarthy is the former wife of New Black Panther Party founder Aaron Michaels, with whom she has a son. She is one of 10 women on Texas death row. McCarthy’s appeals allege that jury selection in her trial was tainted by racism.

HOW LINEUP
Host: RAY HILL, an ex-convict and activist who founded -- and hosted for 30 years -- The Prison Show on KPFT. His internet radio show airs Wednesdays at 2 PM CT.: hmsnetradio.org.

Featured Interview: KATE BLACK, a Houston capital defense attorney who is representing death row prisoner Duane Buck. Her client was condemned after a prosecution witness testified that his blackness made him more dangerous. http://blacklawoffice.org

Reporters Outside the Death House in Huntsville will include GLORIA RUBAC, member, Texas Death Penalty Abolition Movement, www.abolitionmovement.org. Coverage will include the McCarthy execution as well as protests against its being No. 500.

NEXT SCHEDULED EXECUTION
On July 16, Texas plans to kill JUAN QUINTANILLA JR.  If it does, Execution Watch will air.


Posted by Elizabeth at 8:10 PM No comments:

Notes from Madrid on the World Congress Against the Death Penalty

The following is a report by Lily Hughes on her recent Madrid trip to participate in the World Congress Against the Death Penalty.
Over the last few days the Campaign to End the Death Penalty has been represented at the 5th Annual World Congress Against the Death Penalty in Madrid, Spain.  Myself and CEDP board member Delia Perez Meyer (sister of TX death row prisoner Louis Castro Perez) arrived in Madrid on the morning of June 12th and attended the opening ceremonies for the the Congress that very evening!  The conference opened with various government officials from all over the world speaking.  Lots of politicians attended the whole conference, which was a unique experience for us!

Throughout the week we have met some incredible individuals and organizations in the fight against abolition worldwide.

We also met Tanya Ibar, the wife of Pablo Ibar, a Spanish national who has been on Florida's death row since 1994 .  Pablo Ibar's co-defendant was already released based on evidence of innocence which should have applied to both men.

The folks from the Collectif Unitaire National de soutiens a Mumia Abu-Jamal were so helpful to us throughout the weekend, letting us put our materials at their table and showing us the ropes at the conference.

We had a great time hanging out with Will Francome, whose story was the basis for the movie In Prison My Whole Life focusing on Mumia.  His new project is called One for Ten and is a series of ten short films about former death row prisoners that focuses on the different ways innocent people are convicted.  I attended a  session where I saw three of these fantastic short films!

Delia was so happy to connect with the Sant' Edigio Community, a Catholic organization based in Rome that has supported death row prisoners around the world through penpal relationships. We also were able to meet several folks from the British organization Reprieve, that has been responsible for the brilliant campaign to persuade European drug companies to not sell their products for use in executions.

There were many interesting panel discussions throughout the weekend.  Delia's highlights were a sessions called Victim's Families: an international action network.
Bill Pelke, a murder victim family member and the founder of Journey of Hope, spoke here about how the young woman who murdered his grandmother is being released  from prison next week in Indiana, and about his relationship with her over the years, including writing letters and putting her through school - he is traveling straight from Madrid to Indiana to meet her upon her release.  Her other favorite session was one on innocence and abolition - the meeting featured Alvaro Corcuera, a Spanish journalist and Kirk Bloodsworth from WTI, and focused on how to use innocence and judicial errors as an important part of abolition strategy, without penalizing defense attorneys.

My favorite session of the whole conference focused on alternative sentencing.  Several amazing speakers discussed the reasons abolitionists should oppose life without parole (LWOP) as an alternative the death penalty.  One of the speakers represented Penal Reform International, a fantastic group working on penal and criminal justice reform worldwide.  Constance de la Vega, a professor from San Francisco even quoted me at the end of her remarks, not knowing that I was in the room! I spoke during this session about the CEDP's stance against promoting LWOP as a just alternative to the death penalty and my comments were very well received.

In general there were very few U.S. groups represented at the conference.  The U.S. roundtable discussion featured Richard Dieter from the Death Penalty Information Center and Elizabeth Zitrin from Death Penalty Focus.  There was a lot of good information presented here about the state of the death penalty in America today, but I felt that only one strategy for changing public opinion was discussed from the floor - the more conservative strategy focusing on cost, promoting LWOP and partnering with law enforcement that was employed most recently in California.  I also spoke from the floor here and raised some debates, including a point about the huge impact the movements around individual cases like Troy Davis and Stan Tookie Williams have had on how people think about the death penalty.

The CEDP was able to participate in the conference in a few formal ways.  We submitted a poster to display during an informal "poster session" which Delia had created.  The poster featured Delia's brother Louis and focused on our strategy of working on individual cases.  Our poster was displayed alongside several others and we stood around it and discussed it with the different folks that came by. I was called upon to help translate the final statement of the Congress into English from French - kind of a fun job!

On the final day of the Congress, today, there was a huge march against the death penalty through the streets of Madrid.  It was truly incredible to march alongside people from all over the world and hear chants in all different languages.  We carried a big banner like picture of Louis during the march and had our picture taken a lot!  Delia was interviewed by journalists from all over throughout the weekend and at the march.  We'll be posting pictures on our Facebook page very soon.

We are so grateful to the World Coalition to Abolish the Death Penalty (WCADP) and the French abolition group Together Against the Death Penalty (ECPM) for making this trip possible.  We have had an amazing four days and met so many incredible people.  It has truly been an unforgettable experience! 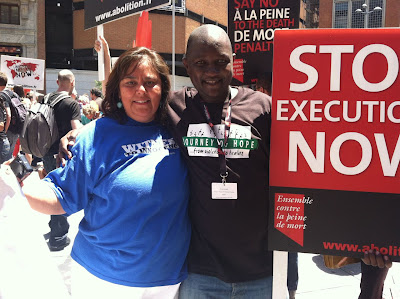 Posted by Hooman Hedayati at 10:08 AM No comments:


TEXAS PLANS TO EXECUTE:
ELROY CHESTER III, who pleaded guilty to shooting to death an off-duty firefighter in Port Arthur when he interrupted the burglary Chester was committing. Chester’s attorneys argued on appeal that he is ineligible for execution because he is mentally impaired, but a divided federal appeals court upheld the sentence. Chester's previous execution date of April 24, 2013, was delayed by the trial court in response to a motion he filed. Chester’s execution would be the 499th in Texas in the modern death-penalty era.


SHOW LINEUP
Host: RAY HILL, an ex-convict and activist who founded -- and hosted for 30 years -- The Prison Show on KPFT. His internet radio show airs each Wednesday at 2 PM CT.: hmsnetradio.org.


Featured Interview: KATE BLACK, a Houston capital defense attorney who is representing death row prisoner Duane Buck. Her client was condemned after a prosecution witness testified that his blackness made him more dangerous. http://blacklawoffice.org


NEXT SCHEDULED EXECUTION
On June 126, Texas plans to kill KIMBERLY McCARTHY.  If it does, Execution Watch will air.