On the 6th Anniversary of Shaka Sankofa’s Murder by the State of Texas and George W. Bush

I met Shaka Sankofa face to face for the first time in the winter of 1998. It was a bitterly cold and oppressive morning on death row. Two nights before, I and 6 six other men had been captured during a failed escape attempt and as a result the prison was under a system wide security lockdown. There would be no recreation and no hot meals for the indefinite future.

The cage that I was place in was without a mattress and my clothes were effectively stripped away. I paced back and forth for most of that night to stay warm but by dawn I was so utterly exhausted that I laid down on the cold steel bunk. With a toilet paper role as my pillow, I slept until the next day.

When I finally came to, a Black man in handcuffs was standing in front of my cage arguing with a group of guards. By the way the guards kept anxiously look into my cage, they were obviously talking about me. I got up to listen.

After a better look, I realized the Black man was Shaka. He was spitting out a fiery lecture on the constitutional rights of prisoners, demanding my bare necessities and refusing to return to his cage until they allowed him to speak with me. I, on the other hand, was getting in the best position to reach through the bars and grab one of the guards. It was all that I could do to help the brother. I knew he was soon to get jumped on. But to my surprise, the guards conceded. I was brought a pair of boxers with the promise of a mattress and a blanket later in the day.

Shaka was facing a pending execution date at that time. But when the brother stepped to the bars to speak with me, his concern was entirely about MY well-being. Shaka Sankofa was willing to sacrifice himself for me. We became friends in that moment and remained so until his final execution date.

Shaka Sankofa was a leader. A father. A student of revolutionary ideology. A strong, analytical, intelligent Black man with the heart of a lion.

But above all, Shaka Sankofa is a selfless spirit, a constant flame in the struggle, reminding us all of our right to stand strong and our duty to fight relentlessly.

As we celebrate Shaka’s life today, may we also embrace and carry on his fight against injustice.

(Howard Guidry is an innocent man who has spent the last decade on death row in Texas after being forced into confessing to a crime he knew nothing about. In September, 2003, Federal Judge Vanessa Gilmore threw out the forced confession, overturned his conviction and ordered Harris County to release or retry him in 180 days. Texas appealed her ruling but lost, so in April of this year Howard was sent from the Polunsky Unit to the Harris County Jail. He is now set to be retried on July 17. Without the coerced confession, the Houston DA has no evidence on Guidry. Support this young man's fight for freedom!
Attend the next meeting of the Howard Guidry Justice Committee on Tuesday, June 27, at SHAPE Community Center, 3815 Live Oak, in Houston, TX at 6:00 PM. For more information call Sister Njeri at 713-237-0357 or email Abolition.Movement@hotmail.com 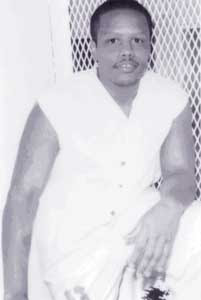 Posted by Hooman Hedayati at 8:55 AM