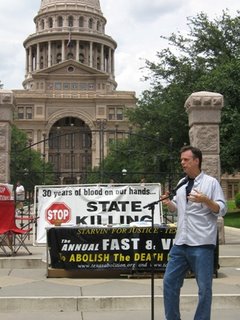 Robert Hoelscher's father, a convenience store manager, was murdered during a robbery in 1961 when Robert was seven years old. Just two days after the murder, Robert's mother called the parents of the offender, a 17 year-old teenager with mental health problems. The offender's father was the real estate agent that had recently participated in the transaction of the new Hoelscher family home. During that call, Robert's mother told the parents of the person that killed her husband and left six children fatherless, "I understand and I forgive. I know that your son is very, very sick. I am a mother. I have sons, too. Hatred will not bring my husband back." That courageous expression of compassion has followed Robert throughout his life. He has never associated healing or closure with the fate of his father's killer. Professionally, Robert worked on policy issues as Deputy Director of the Texas Innocence Network, part of the Barry Scheck inspired innocence movement that investigates wrongful convictions and seeks freedom for individuals convicted of crimes they did not commit. 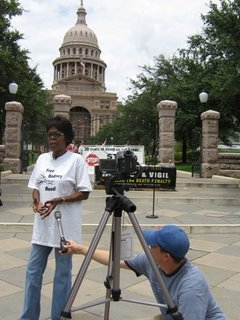 In May of 1998, a Bastrop County jury convicted Bastrop resident Rodney Reed of the murder of a young Giddings woman, Stacey Stites. Stites was murdered in April of 1996, and Reed was arrested a year later, based on a match of his DNA to semen found in Stites' body. On the basis of that DNA match alone, the prosecution argued that Reed had assaulted, raped, sodomized, and strangled Stites -- although there was no other physical evidence connecting Reed to the brutal crime. 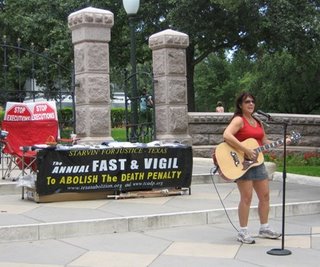 Yes, we had live music! Our volunteers passed out about 1000 brochures to the Capitol visitors during the 1st annual fast and vigil in Texas.

For more information about the SCOTUS fast and vigil please visit Fast and Vigil blog or abolition.org

Posted by Hooman Hedayati at 1:02 PM