1.  Oklahoma, like Arizona and Ohio who've also botched executions, are experimenting on how to kill people, using live subjects. Looking for the best kill methods on prisoners is WRONG!

2. An attorney for Oklahoma death row prisoners has filed a very detailed, 33-page lawsuit against the Dept of Corrections, the executioners, the doctors, the paramedic, the warden -- 14 people in all. There are eight specific violations of law they are charged with and with the sub-points, they enumerate 124 charges against the listed defendants who botched the execution of of Clayton Lockett last April.

3. The autopsy was done in Dallas and Texas Attorney General Gregg Abbott ruled that parts of the results of the autopsy can remain a secret from the public, including the name of the doctor and paramedic and also where the drugs were bought. Gregg Abbott, who is runnig for governor of Texas, has received a very large campaign contributions from a Conroe compounding pharmacist.

5. In a most ironic and factually absurd statement, the prison warden, Anita Trammell, told the investigators that Mr. Lockett was covered with a sheet to "preserve his dignity." 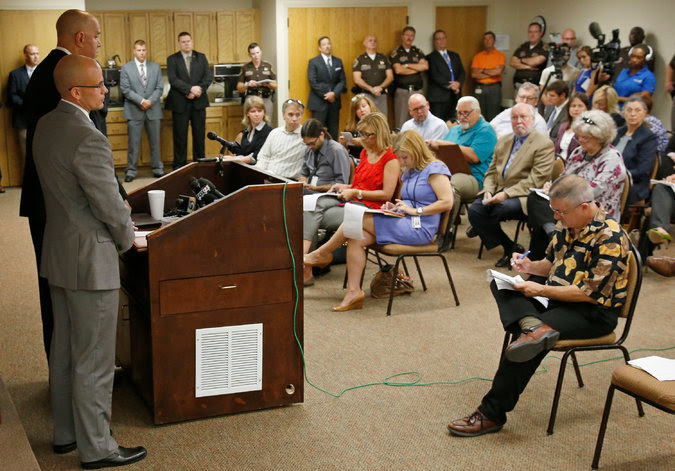 An official report released Thursday about a bungled execution in Oklahoma in April says that an improperly placed intravenous line in the prisoner’s groin allowed the drugs to perfuse surrounding tissue rather than to flow directly into his bloodstream.

The report was ordered by Gov. Mary Fallin after the prolonged writhing and gasping of the prisoner, Clayton D. Lockett, during an execution that drew global attention to death penalty procedures and problems associated with lethal injections.

Because the groin area was covered with a sheet as the injections began — first a sedative intended to render Mr. Lockett unconscious, and then paralyzing and heart-stopping agents — the doctor and paramedic on the scene did not see the bulge, larger than a golf ball, indicating a procedure gone awry, said the report by Michael C. Thompson, the commissioner of public safety.
Posted by Hooman Hedayati at 11:47 AM