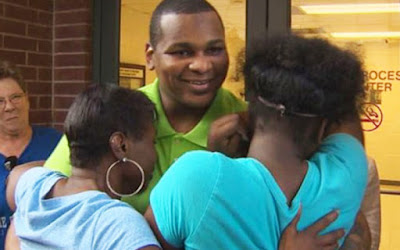 After more than ten years on Texas death row for a crime he did not commit, Alfred Dewayne Brown walked free and into the loving arms of his family and friends on June 8, 2015. "I went in an innocent man and I came out an innocent man," said Brown. Now, he needs your help so that he can rebuild his life. Every donation makes a difference. Will you please help him?

Dewayne's life changed forever on April 3, 2003. It was on that day that Dewayne was falsely accused of a horrible crime which resulted in two deaths. Despite the fact that Dewayne tried to tell the Houston, Texas police that he was at home during the incident, they chose to believe two men who did not want to turn in their buddy, so they "fingered" Dewayne. A series of events took place that Dewayne could not control. He told anyone and everyone that he was home and the landline phone records would prove it because he had called his then girlfriend at work when the news came on. It was these phone records that would be the pivotal point in the release of Dewayne. The Grand Jury argued with Dewayne and threatened his girlfriend with jail time and with taking her children away from her if she did not change her story. She buckled, the DA hid the phone records and Dewayne was sent to Death Row.

Despite the fact he kept telling his trial attorney he was innocent and the phone records would prove it, nothing was presented at trial. It was only after the conviction of the two actual defendants and Dewayne ending up on the infamous Texas Death Row, that several people came forward, admitting to lying and telling the DA that Dewayne was not even aware of the crime.

Nothing impressed the Harris County DA and Dewayne was left with the thought of lethal injection for a crime he had nothing to do with. Appeals were filed and in 2007, the law firm of K&L Gates took the case, honing in on the lost phone records. It took the attorneys six years to find them - IN THE GARAGE OF AN INVESTIGATOR. The DA in 2007 stated that failure to disclose the records "was inadvertent and not in bad faith. It was one piece of paper". The trial judge signed orders for a new trial, the Texas Court of Criminal Appeals threw out the conviction and ordered a new trial in November 2014.

Lisa Falkenberg, a columnist for the Houston Chronicle, took notice of Dewayne and wrote a series of articles concerning his case and the Grand Jury. Making waves around the world and winning the coveted Pulitzer Prize for her series, Ms. Falkenberg has shed light on the barbaric Grand Jury system in Harris County, from threatening witnesses to using ex-cops to serve as foreman (on nine juries). It took the new DA, Devon Anderson, seven months and two days, to announce that Harris County has no evidence to bring charges against Dewayne and he should be set free.

Dewayne spent 12 years, 2 months and 5 days behind bars for something he had no part in. That is 4,449 days or 106,776 hours of his life that was stolen from him. Nearly every one of those days were spent in solitary in a cell no larger that a small bathroom. Living with the fact that he could be executed any day. Torn away from his family, not being able to be a father to his daughter. For this, the State of Texas needs to compensate Dewayne. But, because of the "clever" wording in the paperwork when Devon Anderson declared that Harris County has no evidence against Dewayne, it will be an uphill battle to win compensation. A battle that will not be won any time soon.

This is where the people of the world come in. Dewayne needs your help now to get on his feet. He needs to rebuild his life that Harris County and the State of Texas stripped from him. Going straight from solitary to the "free world" is no easy task. He needs time to adjust being able to make decisions on his own, at a pace that is comfortable to him. We can never give these years back to Dewayne. But, we can help him manage more comfortably. Please give what you can. Everything makes a difference.

Read more about the day Dewayne was released here.

This fundraiser is being conducted with the consent of Dewayne Brown, who will receive all funds raised, minus the 3 percent charged by the credit card processing company. We have also obtained consent from Dewayne's legal team. While Indiegogo Life doesn’t charge a fee, payments are handled by third-party processors who charge a 3% transaction fee.

At the end of the 30 day campaign, the donations will be transferred directly from the life.indiegogo.com system to a bank account set up by Dewayne's legal team for his exclusive benefit.

The fundraiser organizers are a group of Texas death penalty abolitionists who want to help Dewayne. Organizers include Pat Hartwell, Scott Cobb, Hooman Hedayati, Gloria Rubac, and Delia Perez Meyer, as well as the organizations Texas Moratorium Network, Texas Death Penalty Abolition Movement, Campaign to End the Death Penalty, and others to be listed as they endorse the fundraiser.
Posted by Hooman Hedayati at 5:01 PM