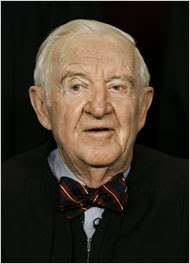 Justice John Paul Stevens who in 1976 announced an opinion allowing resumption of the death penalty, has now turned against the death penalty making him the only abolitionist person in the court. Here is NYT's article about this issue.

WASHINGTON — When Justice John Paul Stevens intervened in a Supreme Court argument on Wednesday to score a few points off the lawyer who was defending the death penalty for the rape of a child, the courtroom audience saw a master strategist at work, fully in command of the flow of the argument and the smallest details of the case. For those accustomed to watching Justice Stevens, it was a familiar sight.

But there was something different that no one in the room knew except the eight other justices. In the decision issued 30 minutes earlier in which the court found Kentucky’s method of execution by lethal injection constitutional, John Paul Stevens, in the 33rd year of his Supreme Court tenure and four days shy of his 88th birthday, had just renounced the death penalty.

In an opinion concurring with the majority’s judgment, Justice Stevens said he felt bound to “respect precedents that remain a part of our law.” But outside the confines of the Kentucky case, he said, the time had come to reconsider “the justification for the death penalty itself.”

He wrote that court decisions and actions taken by states to justify the death penalty were “the product of habit and inattention rather than an acceptable deliberative process” to weigh the costs and risks of the penalty against its benefits.

His opinion, which was not separately announced in the courtroom, was the culmination of a remarkable journey for a Republican antitrust lawyer.

During his tenure, Justice Stevens, originally an opponent of affirmative action, has changed his views on that and other issues. “Learning on the job is essential to the process of judging,” he observed in a speech in 2005.

But it is on the death penalty that his evolution is most apparent. He was named to the Supreme Court by President Gerald R. Ford at a time when ferment over capital punishment was at a peak. Less than four years earlier, the court had invalidated every death penalty statute in the country, and states were racing to draft laws that would test the court’s tolerance for a fresh start.

In July 1976, little more than six months after taking his seat, Justice Stevens announced the opinion for the court in Jurek v. Texas, one of the three cases by which the justices gave their approval to a new generation of death penalty statutes. The defendant, Jerry Lane Jurek, had been convicted of kidnapping a 10-year-old girl from a public swimming pool and then raping and killing her.

The new justice’s opinion described the crime in vivid detail before concluding that Mr. Jurek’s death sentence was constitutional because “Texas has provided a means to promote the evenhanded, rational and consistent imposition of death sentences under law.”

During the child rape argument on Wednesday, it was the lawyer for Louisiana who was giving the vivid description of the crime, recounting in grisly anatomic detail the injuries inflicted on an 8-year-old girl by her stepfather, the convicted rapist challenging the state’s death penalty law. As justices and the courtroom audience cringed, the air seemed to leave the room, along with any points the defendant’s lawyer had managed to make in his initial turn at the lectern.

Justice Stevens had remained silent during that first half of the argument, but now he pounced. “Could you clarify?” he began, interrupting the state’s lawyer, Juliet L. Clark. “Were those injuries permanent?”

He knew the answer, of course: the record of the case indicated that the girl’s physical injuries had healed in two weeks. His point was to bring the anatomy lesson to an end and refocus the argument on the legal issues. If it was also to throw the state’s lawyer off stride, he succeeded in that as well. Ms. Clark, reluctantly conceding that the injuries had healed, shifted to her legal arguments. Justice Stevens’s mild expression and tone never changed.

His renunciation of capital punishment in the lethal injection case, Baze v. Rees, was likewise low key and undramatic. While reminiscent of Justice Harry A. Blackmun’s similar step, shortly before his retirement in 1994, Justice Stevens’s opinion lacked the ringing declaration of Justice Blackmun’s “From this day forward, I no longer shall tinker with the machinery of death.” Justice Stevens’s strongest statements were not in his own voice, but in quotations from a former colleague, Justice Byron R. White, an early death penalty opponent.

But Justice Stevens was not so restrained last June in an opinion dissenting from a decision that in retrospect appears to have been, for him, the final straw. In that case, Uttecht v. Brown, a 5-to-4 majority gave state courts great leeway in death penalty trials to remove jurors who express even mild doubt about capital punishment.

“Millions of Americans oppose the death penalty” and yet can serve as conscientious jurors, Justice Stevens objected then, adding that the majority “has gotten it horribly backwards” in enabling prosecutors to weed them out.

In his opinion on Wednesday, Justice Stevens said the Uttecht decision was “of special concern to me,” and used it to explain his journey from Jurek v. Texas to Baze v. Rees. Those who voted to uphold the death penalty in 1976, he said, “relied heavily on our belief that adequate procedures were in place” to treat death penalty cases with special care so as to minimize bias and error.

“Ironically, however,” he continued, “more recent cases have endorsed procedures that provide less protections to capital defendants than to ordinary offenders.”

In other words, capital punishment had become for him, in the court’s hands, a promise of fairness unfulfilled.

One of the court’s most frequent dissenters throughout his tenure, Justice Stevens, an optimist at heart, does not look back on every loss with such a sense of stinging disappointment. In 1989, he dissented vigorously from the court’s decision in Texas v. Johnson that flag-burning is a form of expression protected by the First Amendment. While he still believes he was right, he told a Chicago audience of lawyers in 2006, he sees a silver lining: flag-burning has all but disappeared.

“What once was a courageous act of defiant expression,” he said, “is now perfectly lawful, and therefore is not worth the effort.”

Posted by Hooman Hedayati at 2:06 PM