Report from the Meeting of Texas Forensic Science Commission 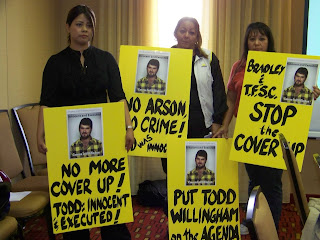 Todd Willingham's name was never spoken aloud at the meeting of the Forensic ScienceCommission Friday in Harlingen. Yet his presence was certainly there, loud and clear. Grits For Breakfast live blogged the meeting.
Members of the Abolition Movement and the Rio Grande Valley chapter each carried bright yellow foam boards with Todd's picture on them and we added different slogans. Sylvia Garza, mother of Bobby Garza, who is on death row under the disgusting laws of parties, was glared at by D.A. Bradley all during the meeting, as her sign read: "Bradley & T.F.S.C.: Stop the Cover-up!"

He wants sole control of the committees he proposed, he want to name which 3 members get to review each complaint presented to the commission and name the chair of the three-member committee. He doesn't want anyone except himself speaking to the media and this did not sit well, although I think it is now policy.

While a couple of commissioners did refer to Todd's case, it was called a "weighty matter that we need to finish working on," and never was his name uttered.

Hopefully some of us can make it to the April meeting in Ft. Worth. Bradley's plan of keeping out of the media spotlight did NOT work, however! He would have had to cross the border, I guess!
Also, our two organizations were invited to do a workshop at the 5th Annual Peace and Justice Gathering in Weslaco on Saturday at the South Texas College. Sylvia and I did ours two times, once in Spanish and the second time in English. We attracted a good crowd (there were three other workshops going on). Both sessions had a number of young people who were interested in attending the Alternative Spring break in Austin and these youth are in HIGH SCHOOL! They just wanted to know if parents could come with them. They belong to a service organization called ARISE! Sylvia spoke with one parent and will be going to their high school to speak to the whole club.

A good two days of action for abolition. Thanks to Sylvia, Mona, Lydia, Janie, and Marisol for their long days of abolition work ! !
Posted by Hooman Hedayati at 11:04 PM