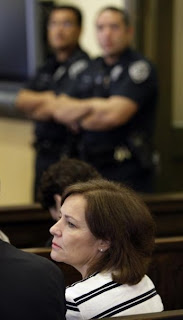 The Austin American Statesman reports on the latest news in the ongoing saga of Judge Sharon Keller, who is appealing her sanction of a "Public Warning" for judicial misconduct for her actions on the day of the execution of Michael Richard, when she said "we close at 5".  You can read the latest charging documents here, filed by the State Commission on Judicial Conduct with the three-judge review panel appointed by the Texas Supreme Court to hear Keller's appeal. All three judges on the review panel are Republicans, as is Keller.


The special counsel for the State Commission on Judicial Conduct this morning filed charges accusing Judge Sharon Keller of violating her duty as a judge during a botched 2007 death penalty appeal.

It’s the next step in Keller’s appeal challenging the commission’s public warning, issued in July. The warning said Keller acted improperly by choosing to close the Court of Criminal Appeals clerk’s office at 5 p.m. despite knowing that defense lawyers wanted to file an appeal in a pending execution.

The charges lay out, point by point, the commission’s version of what happened on Sept. 25, 2007, when lawyers for murderer Michael Richard requested extra time to file an appeal. The points were compiled from sworn testimony by Keller and others.

The charging document was filed with a three-judge special court of review, which now has 30 days — with a 30-day extension available — to schedule a hearing on the charges.

After the hearing, the review court has 60 days to render a decision about whether Keller was properly reprimanded by the commission, an independent agency that investigates allegations of wrongdoing by Texas judges.