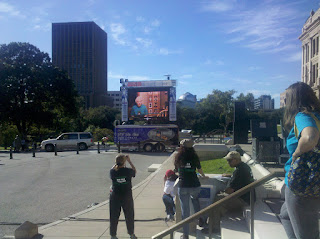 This is the video of Eugenia Willingham that we played on the giant Jumbotron at the 11th Annual March to Abolish the Death Penalty. She is Todd's mother. She reads a part of a letter that Todd Willingham wrote to her talking about abolishing the death penalty.

Texas Moratorium Network's Scott Cobb drove to Ardmore, Oklahoma on Sunday, October 24 to visit with Todd's family and record the message. The video was edited and played on the jumbotron by Hooman Hedayati.