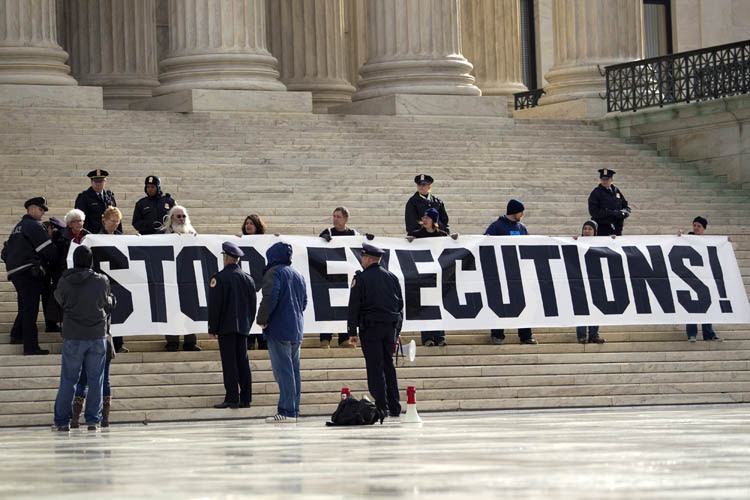 Inside, the Supreme Court was hearing arguments in a dusty federal tax case. Outside, police were arresting 14 death penalty protesters who unfurled a 30-foot wide banner with the message "STOP EXECUTIONS!" on the Court's marble plaza. One by one this morning, the demonstrators were escorted or dragged away for violating the federal law (40 U.S.C. 6135) that forbids "processions or assemblages" on Supreme Court grounds.
The protest marked the 35th anniversary of the Utah execution by firing squad of Gary Gilmore, the first execution since the high court's reinstatement of the death penalty in 1976. It was a repeat of a similar demonstration five years ago, and in between, numerous others -- from Princeton philosopher Cornel West to demonstrators dressed like Guantanamo detainees -- have been arrested in the same location.
The demonstrators assembled beforehand at the nearby United Methodist Building where they discussed what to expect when arrested, and held hands in prayer. Bethesda, Maryland solo practitioner Mark Goldstone, longtime lawyer for Court protesters, briefed the group on the legalities, and told them, as he put it later, "It's too bad you aren't corporations, because then you would have more First Amendment protections."
Shortly after 10 a.m., the protesters ambled over to the Court to begin a process that they knew would end in arrest. In a 1983 decision United States v. Grace, the Supreme Court upheld the constitutionality of a no-protest zone on Court property. It allowed demonstrations on the public sidewalk in front of the Court, so the protesters today probably knew they were breaking the law as soon as they walked onto the Court's marble plaza.
Court police were out in force in anticipation of the protest, but they allowed the demonstrators to enter the plaza and begin climbing the majestic steps, even though the steps are no longer used as an entrance. Suddenly, one of the group took the rolled-up banner out from under his coat and the demonstrators, now facing the street, unfurled the banner for all to see. Encouraged nearly 100 demonstrators on the sidewalk, they chanted "Abolition now!" and "They say death row, we say hell no!"
Court police watched intently, but did nothing to stop the protest or to confiscate the banner.  After a few minutes, Court police chief Ross Swope came out from the Court building with a bullhorn to warn those holding the banner that they were in violation of the law and "will be arrested." After 10 more minutes of chants, the police started to move in with plastic handcuffs. The arrests came one at a time at one end of the banner. As each protester was taken away, those remaining spread out to keep the banner aloft. When only two protesters were left, they dropped it. As they were taken away, Court police folded up the banner neatly. After processing inside the Court building, the arrestees were expected to be detained overnight by D.C. police and arraigned on Wednesday.
Goldstone, a veteran observer of these demonstrations, said he was generally pleased with the conduct of the Court police. "They seemed very relaxed, and didn't prevent the demonstration from happening," Goldstone said, adding that he was impressed by their respectful handling of the banner. "They didn't just grab it away or treat it like an incendiary device."
Photograph: AP Photo/Evan Vucci
Posted by Hooman Hedayati at 2:16 PM