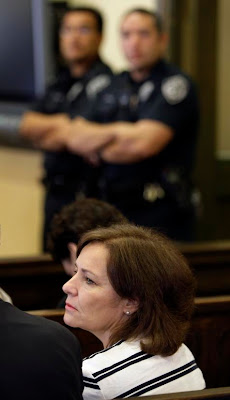 The following article was in today's New York Times. It is significant that this reprehensible, pro-prosecution judge, who has done so much more than kill Michael Richard by "closing at 5:00," is now a defendant.


It is important for all of us who are activists to recognize the role we play in bringing down capital punishment. Sharon Keller would not be on trial today if it were not for activists with the Texas Moratorium Network who figured out how to focus on this faux paux by a judge to bring attention to the death penalty.

Screw ups like this happen every day in Texas courts. But we were able to use this one in our struggle because TMN filed a complaint with the Texas Commission on Judicial Conduct. Many of us did not even know what this commission was.

But, this made our outrage legitimate. Then Scott Cobb and others spoke with legislators and notified the media and began a campaign of getting others to sign on to the complaint. Then things began to snowball. Almost 2000 people signed on to the complaint. A legislator was encouraged to file a bill in the last session to impeach Keller. Then he had a press conference about his impeachment bill. Finally these charges were filed against Keller and now she is on trial.

The execution of Michael Richard could have been just another blip on the body count radar in Texas, but it became a major scandal. Now we have another article about Keller in the New York Times and this news report on CNN.


The lesson for activists: never leave a stone unturned. Always let our outrage at injustice turn into action. Follow up on every despicable action, whether it is a sleeping judge or a judge and DA having an affair during a capital murder trial, a crime lab screwing up, or a court appointed attorney never meeting with his/her client.

Of course, for us in Texas, we have so many more opportunities to do this because the outrageous, racist, illegal and immoral injustices abound. But, every state with the death penalty has injustices--find them and expose them and stay upset or outraged or whatever and let people know.

SAN ANTONIO — The highest-ranking criminal judge in Texas, the woman who presides over the most active execution chamber in the country, sat at a defense table on Monday to face charges of intentionally denying a condemned man access to the legal system.

The judge, Sharon Keller of the Texas Court of Criminal Appeals, took her seat before a gallery crowded with bloggers, lawyers and death penalty protesters. Outside the courthouse, demonstrators called for her ouster. Inside, lawyers on both sides emphasized that capital punishment was not on trial.

But to some, Judge Keller has come to embody the practice. An intensely private former member of the Dallas County District Attorney’s Office, she won election to the court in 1994 and to the post of presiding judge in 2000. She has cultivated a reputation for rulings favorable to the prosecution in death penalty cases.

On Sept. 25, 2007, Judge Keller put in a 10-hour workday and went home around 4 p.m. to meet a repairman. That morning the United States Supreme Court had effectively suspended lethal injection as a manner of execution by accepting a challenge to its constitutionality in a Kentucky case.

Largely on the basis of the justices’ action, lawyers for a Texas death row inmate were putting together an appeal to stave off execution. An assigned duty judge was waiting at the courthouse for any last-minute appeal on the inmate’s behalf.

Around 4:45 p.m., the general counsel of Judge Keller’s court called her to relate a request to file paperwork after 5 p.m., the usual closing time for the court clerk’s office. Judge Keller replied that the clerk’s office closed at 5 p.m. A few hours later, the inmate was executed.

As the story behind the execution spread, defense lawyers, editorial boards and legislators called for Judge Keller’s removal. In February, the State Commission on Judicial Conduct filed formal charges. The case was assigned to a special master, Judge David Berchelmann Jr. of the district court here in Bexar County, for the civil fact-finding proceeding that opened Monday.

In written arguments, the commission contends that Judge Keller circumvented normal procedures, which provide for after-hours appeals in capital cases. Judge Keller responds that the lawyers for the inmate, Michael Richard, a convicted murderer who made no claim of innocence, should have filed their paperwork with the assigned duty judge rather than trying to go through the clerk’s office.

The trial, expected to last most of the week, promises to unfold as a finely wrought dance around the details of an afternoon’s timeline.

At issue are such intricacies as whether the words “court” and “clerk” were used interchangeably and the extent to which the inmate’s lawyers conveyed the computer problems that delayed their paperwork. At the end of the proceeding, Judge Berchelmann will make recommendations to the commission, which in turn will consider further action. The commission has the power to censure a judge or to recommend removal by a tribunal.

As the lawyers presented their opening arguments Monday, Judge Keller slumped a bit in her chair.

“This is not a referendum or a debate or a poll concerning the death penalty,” said John J. McKetta, the examiner presenting the commission’s case, who argued that Judge Keller had proved incompetent to administer capital punishment with the necessary gravity, discretion and care.

“If all she did was field a call where somebody said, ‘I’ve forgotten what the closing time is,’ and she said, ‘Five o’clock, don’t you remember?,’ we shouldn’t be here today,” Mr. McKetta said.

A lawyer for Judge Keller, Charles L. Babcock, argued that the entire case amounted to a few innocent, misunderstood words spoken on the telephone.

“Judge Keller is an honorable, competent, popularly elected judge who believes in and follows the rule of law,” Mr. Babcock said.

After opening arguments, the commission called witnesses including Judge Cheryl Johnson of the Court of Criminal Appeals, the assigned duty judge on the night of the execution. Judge Johnson testified that she had waited after closing time but never received a call.

“If I had known that they had asked for time, I would have granted it,” she said of Mr. Richard’s lawyers. “It’s an execution.”

When the hearing broke, Judge Keller, 56, walked to the elevator in silence, accompanied by lawyers, escorted by deputies and trailed by protesters.

Posted by Hooman Hedayati at 12:25 AM

I wonder if Richards' let his victim stay alive a few extra minutes? I also wonder why his attorneys would wait until 4:45 in the afternoon when the man had been on death row for TWENTY FIVE YEARS? He was convicted twice and sat for 25 years awaiting his sentence. Did he allow his victim or her 7 children the same EXTRA TIME he wanted from the court?

May he burn in hell and Judge Keller run for higher elective office. We need people with principles, not the usual liberal left leaning whack-jobs who want to run the world with the ACLU while singing Kumbaya.

You anti-death penalty folks put yourself if Richards' victim's children's shoes. Their mother was dead for 25 years while he lived. Preposterous!!!

Dear Anonymous,
Instead of spouting partisan bile, why don't you read the article? The defense attorneys didn't "wait until 4:45." The Supreme Court had made a ruling THAT MORNING that gave them new grounds to stay the execution. Filing any kind of court motion takes time and research, and its unsurprising that they would have trouble meeting a deadline only a few hours later.

I believe in the death penalty too, but it is indefensible unless defendants are given the due process of law. In this case, Judge Keller, whether through carelessness, or calousness, failed to give a defendant access to that due process. That is the issue here, not the death penalty itself.