Alternative Spring Break: Learning how to participate in the legislative process

The following is the third and last blog post by James Tate, a student at the University of Texas at Dallas, for the Dallas Morning News. You can also read Part 1 and Part 2 of this series online.

It was the final day of the Anti-Death Penalty Alternative Spring Break, and they say that all good things must come to an end. But fortunately for us, our mission doesn't end here. We have gained essential tools and personal stories to share with a public that tends to develop generalized opinions based on a snap-shot of the issue.

On this final day, we were first introduced to Vincent Villano from Campus Progress (campusprogress.org), that helps students on campuses around the country mobilize their student bodies for an array of issues and policies they believe in. He guided us through a workshop that loaded our tool belt with effective means of communicating with the press, some insight into giving press conferences, and how to speak in "sound bites" when giving an interview with a reporter. The media filters interviews in search of quick impactful statements that make for good viewing. Together the spring breakers collaborated on a message toolbox to develop our very own message, and the results would later pay off. 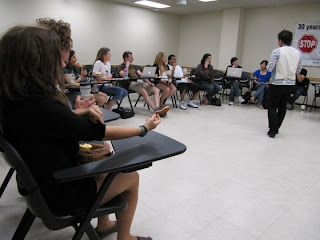 Much importance was paid to conveying our message - and to the right people. Legislators and their staff are combated with a variety of issues by numerous lobbyists on any given day in the Capitol. We were obliged to spend some time with Alison Brock, Chief of Staff to Texas State Representative Sylvester Turner. She was just as humorous as she was knowledgeable and her demeanor brought some much needed laughter to the students. I was shocked to see how few students were aware of who their representatives were. She guided us to www.house.state.tx.us , and accordingly to www.senate.state.tx.us to locate the legislators in our districts. "Relationships drive your agenda," Ms. Brock shared, and reminded us that it isn't always about what you know, but more importantly who you know. It was remarkable to get an inside perspective of the actions that will actually get a response from the representatives and their aides. 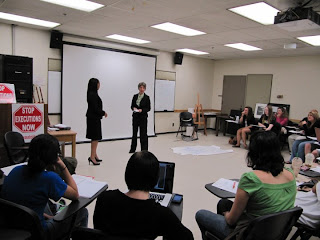 Our official press conference and panel discussion began at 11:00 a.m. and the anxiety seemed to return to the students. The difference between workshops in the Communications building on the UT campus, and a media-filled room in the Capitol are incomparable. Our location was the Texas House Speaker's Committee room and poised in front of a wall mural of the Texas emblem, our eyes gazed as each exoneree delivered their story. Although we had heard each of these stories prior, the astonishment of these travesties resonates still. It is a humbling experience to stand in front of a man standing 6 feet 2 inches tall as tears roll down his face. I think the realness of this conference finally settled in.

We were given the opportunity to scatter throughout the Capitol in our grassroots attempt to lobby. Being that the Texas Legislature is not in session, few legislators were available, but just walking down the halls breeds confidence. The experience sparked something in the students and reminded us that the distance between us and our elected officials is not all that broad. The Capitol is an open public building and with names posted outside the door, one can literally walk right into their representative's office. Is it really that easy? Yes and no. Gaining access to staff seems to be considerably easier that gaining access to the representative themselves, but the ability is there and with a little determination gaining some one-on-one time is most likely reachable. Perhaps I will return during session.

The climax to our day, and the conference as a whole, occurred at 5:00 pm when we gathered on the South steps of the Capitol. Once again, at a podium, the exonerees along with guest speakers from other anti-death penalty organizations delivered quick impactful synopsis of their personal stories. The turnout was greater than I imagined. Media was in tow and amazingly tourists halted even if for a moment to hear the commotion. My attention caught an older woman who had stopped for a moment to listen. She appeared to be somewhat shocked by what she was hearing, perhaps a little appalled. Whatever her reasoning she picked up a protest sign and joined the others on the steps. Does it simply take a little understanding to grasp the injustice that is taking place? Our rally gave way to a march down Congress Avenue, through Sixth Street, and back again. The energy was electric, and the SXSW participants seemed more than welcoming to our sign and chants. Some applauded and some joined in for a block or two. This was a refreshing end to a loaded week. Our mission ended with a call for justice. Our voices were loud and our hearts pounded with the opportunity to be part of the process. 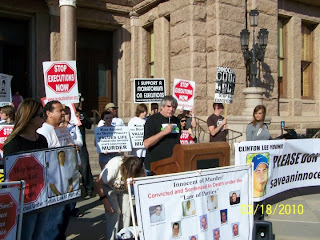 Bill Pelke of Journey of Hope from Violence to Healing, talks
during the capitol rally.

All in all, this experience was moving. I had the opportunity to learn details about the death penalty and it cemented by previous convictions of its wrongness. I met six people who had lived the hell that we had talked about all week. I met students from all over the country that shared my opinions and speakers from different organizations that donated their time to sharing their expertise. If someone unaware were to have looked into the room were meeting in all week, they would have witnessed our very own Breakfast Club. There was the ex-military, the preps, the outcasts, the overachievers, the laid-back "silent-but-deadly", and the amateur journalist documenting it all. Each from our own background, with our own ideals and stereotypes, we were most definitely unique. But however distinct we were, our purpose was common. We all believe that the death penalty is barbaric and archaic, and should be abolished in the same manner as slavery and lynching. I don't believe in murder in any form - be it a citizen or the State. Murder is murder, and it is not the right of any government to use it on its citizens. 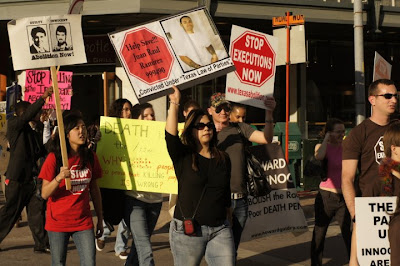 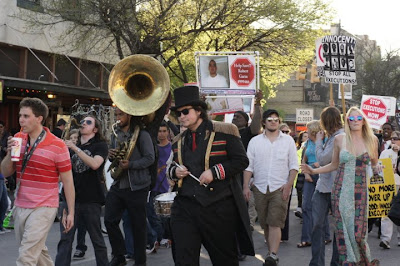 Posted by Hooman Hedayati at 11:27 AM