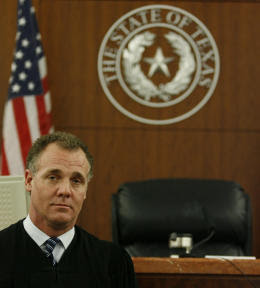 “Based on the moratorium (on the death penalty) in Illinois, the Innocence Project and more than 200 people being exonerated nationwide, it can only be concluded that innocent people have been executed,” state District Judge Kevin Fine said. “It's safe to assume we execute innocent people.”

A Houston judge on Thursday granted a pretrial motion declaring the death penalty unconstitutional, saying he believes innocent people have been executed.

“Based on the moratorium (on the death penalty) in Illinois, the Innocence Project and more than 200 people being exonerated nationwide, it can only be concluded that innocent people have been executed,” state District Judge Kevin Fine said. “It's safe to assume we execute innocent people.”

“Are you willing to have your brother, your father, your mother be the sacrificial lamb, to be the innocent person executed so that we can have a death penalty so that we can execute those who are deserving of the death penalty?” he said. “I don't think society's mindset is that way now.”

The motion was one of many submitted by defense attorneys Bob Loper and Casey Keirnan arguing Texas' death penalty was unconstitutional for their client, John Edward Green Jr.

Loper said he and Keirnan were pleased by Fine's ruling, which will be appealed and almost certainly reversed.

“It's pretty traditional in these cases to file as many motions as you can and try to find something the judge finds approaches unconstitutionality,” Loper said.

If Fine's ruling were to be upheld, it effectively would take away the option of the death penalty in Green's case.

In their motion, Loper and Keirnan assert, “The system that determines who should die in Texas is truly ‘broken.' ”

They argued, and Fine agreed, that the law providing for the procedures surrounding instructions to a jury in the Texas Code of Criminal Procedure violate the Eighth and 14th Amendments to the U.S. Constitution prohibiting cruel and unusual punishment and guaranteeing the right of due process.

Green, 23, is accused of fatally shooting a Houston woman and wounding her sister on June 16, 2008.

“Words are inadequate to describe the Office's disappointment and dismay with this ruling; sadly it will delay justice for the victims and their families,” the statement said. “We will pursue all remedies.”

The statement noted that the Texas Court of Criminal Appeals and other appellate courts consistently have rejected the same arguments.

“We respectfully, but vigorously, disagree with the trial judge's ruling, as it has no basis in law or in fact,” Lykos wrote.

“We regret that the court's legally baseless order unnecessarily delays justice and closure for the victim's family — including her two children, who witnessed their mother's brutal murder,” the statement said.

“You never know, but I don't see it happening at this time,” Thompson said. “Technically, they're bound by precedent. There are laws on the books that have ruled on this type of question.”

Thompson said trial judges sometimes grant rulings that are unlikely to stand up on appeal to start a dialogue in the judicial branch.

“If they feel strongly enough, sometimes they'll grant a motion like this to buck the system, just to stir the waters,” Thompson said.

Special guests will be six innocent death row exoneress: Shujaa Graham, Curtis McCarty, Ron Keine, Derrick Jamison, Perry Cobb and Juan Melendez. They are attending alternative spring break to speak with participants about how innocent people can end up on death row. Altogether, the six exonerees attending the alternative spring break spent a total of about 65 years on death row for crimes they did not commit.
Posted by Hooman Hedayati at 6:59 PM