Convicted killer Michael James Perry was executed Thursday evening for gunning down a nurse at her home north of Houston nine years ago and stealing her car.
Perry, 28, mouthed to relatives and friends watching through a window that he loved them.
"I want to start off to everyone involved in this atrocity, they're all forgiven by me," he said in a brief statement from the death chamber gurney.
He lifted his head from the pillow and his voice cracking, cried out: "Mom, I love you."
"I'm coming home Dad. I'm coming home," he added. His father died last month.
He never acknowledged relatives of his victim who looked through an adjacent window.
As the drugs took effect, his eyes fluttered and he hiccupped four times. A single tear ran down his right cheek, prompting quiet sobs from his mother and an aunt and friends. The victim's relatives gasped and motioned to each other.
Nine minutes later, at 6:17 p.m., he was pronounced dead, making him the 14th prisoner executed this year in Texas, the nation's most active death penalty state. 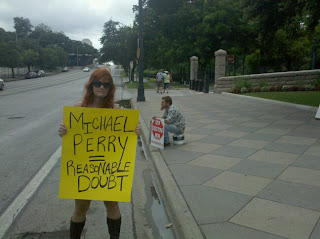 Posted by Hooman Hedayati at 2:01 AM

This execution illustrates, somewhat ironically, how ineffective the death penalty can be in terms of serving justice to the victims - Perry's cases implies thag when these people are on the brink of a cold, mechanical and organised death, which they have contemplated for months, it simply becomes a kind of strange theatre, which often revolves soley around the prisoner and his/her family members behind the sheet of glass. The victims, however, do not play a role in it at all. As always, an informative and very useful post - thanks.

An innocent young man murdered in the state of texas. May he rest in peace.