Retrial Ends in Life for Former Death Row Inmate; Co-Defendant Greg Wright Executed in 2008 Saying "Before you is an innocent man" 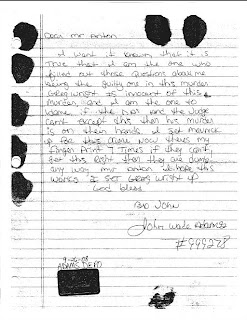 According to the Dallas Morning News, a retrial has resulted in life in prison for John Adams, a person formerly on Texas death row. The co-defendant in the case, Gregory Wright, was executed in 2008. Wright professed his innocence until his death, he said in his last words that it was John Adams who actually killed the victim. Now, Adams has been removed from death row and given life. But did Texas execute someone who did not kill anyone, namely Greg Wright? You can read more about the case at www.freegregwright.com.


Yes I do. There has been a lot of confusion on who done this. I know you all want closure. Donna had her Christianity in tact when she died. She never went to a drug house. John Adams lied. He went to the police and told them a story. He made deals and sold stuff to keep from going to prison. I left the house, and I left him there. My only act or involvement was not telling on him. John Adams is the one that killed Donna Vick. I took a polygraph and passed. John Adams never volunteered to take one. I have done everything in my power. Donna Vick helped me; she took me off the street. I was a truck driver; my CDL was still active. Donna gave me everything I could ask for. I helped her around the yard. I helped her around the house. She asked if there were anyone else to help. I am a Christian myself, so I told her about John Adam. We picked him up at a dope house. I did not know he was a career criminal. When we got to the house he was jonesin for drugs. He has to go to Dallas. I was in the bathroom when he attacked. I am deaf in one ear and I thought the T.V. was up too loud. I ran in to the bedroom. By the time I came in, when I tried to help her, with first aid, it was too late. The veins were cut on her throat. He stabbed her in her heart, and that's what killed her. I told John Adams, "turn yourself in or hit the high road." I owed him a favor because he pulled someone off my back. I was in a fight downtown. Two or three days later he turned on me. I have done everything to prove my innocence. Before you is an innocent man. I love my famly. I'll be waiting on ya'll. I'm finished talking.


The state of Texas will not execute John Wade Adams for the 1997 murder of Donna Vick. He will serve a life sentence instead.

In a rare Sunday court session, District Judge Gracie Lewis discharged the jury that had been deliberating Adams' penalty. She ruled that the Dallas County jury was not able to make the life-or-death decision after 27 hours of deliberation over three days.

"Our prayers were answered," said Bobbie Adams Satterlee, one of a dozen family and friends who came from Louisiana and Alabama for the retrial of the penalty phase.

Adams' guilt was not at issue. He had been tried for stabbing Vick to death and found guilty of capital murder 12 years ago. The only question was whether his death penalty should stand or be reduced to life in prison.

Defense attorneys argued his punishment should be life in prison because the original trial jury did not hear evidence about Adams' abusive childhood, evidence that family members presented in a retrial that spanned the last two weeks.

Gregory Wright was also convicted of the Vick murder and was executed in 2008.

To watch Greg Wright's wife Connie speaking at the 10th Annual March to Abolish the Death Penalty in 2009 click here. She starts speaking around the 2 minute 30 second mark.

Posted by Hooman Hedayati at 1:30 AM