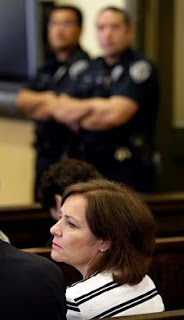 Mary Alice Robbins of Texas Lawyer is reporting that Sharon Keller will have her appeal heard by a three judge panel. We looked up the party affiliation of the three judges and no surprise, all three judges are Republicans. Also no surprise, but Keller's lawyer says “They’re all fine judges.”

Texas Supreme Court Chief Justice Wallace Jefferson has appointed three court of appeals justices to hear Court of Criminal Appeals Presiding Judge Sharon Keller’s appeal of the public warning issued to her by the State Commission on Judicial Conduct. Fort Worth’s 2nd Court of Appeals Chief Justice Terrie Livingston will preside over the special court of review, which also will include 1st Court of Appeals Justice Elsa Alcala of Houston and 9th Court of Appeals Justice Charles Kreger of Beaumont, according to Jefferson’s Aug. 18 letter to those three justices. Jefferson notes in the letter that, pursuant to Texas Government Code §33.034, he selected the justices’ names by lot and assigned them to hear Inquiry Concerning Judge No. 96. Charles “Chip” Babcock, Keller’s attorney, a Jackson Walker partner in Dallas and Houston, says of the appointees, “They’re all fine judges.” Babcock says the timing of the special court’s hearing in the Keller case depends on whether the panel will conduct the review de novo or in an appellate proceeding. “I assume at some point somebody will tell us which,” he says.

Posted by Hooman Hedayati at 6:48 PM

No surpise, this unspeakable human being would surround herself with hanging 9 -5 judges. They probably take huge election contributions from oil companies. I don't know why you guys are such Christians. If there were a god, Texas would be a hole in the ground.