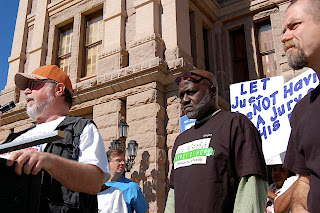 The first organizing meeting to prepare for the 11th Annual March to Abolish the Death Penalty is on Saturday August 21 at the Carver Library in Austin from 3:00-4:30 pm. Please come to the organizing meeting and help us make this year’s march as great a success as last year’s! (Pictured: Death Row Exonerees Ron Keine, Shujaa Graham and Curtis McCarty at last year's march)

Everyone who wants to help organize this year’s march is welcome to attend. Last year, we had the largest turnout since 2000 and the march was covered in all the state newspapers, including a photo on the cover of the Dallas Morning News. You can see some links to media coverage of last year on the march media page. The website also has videos of some of last year’s speakers.
The march itself is scheduled for October 30 in Austin. More details to come.
The annual march is organized by several Texas anti-death penalty organizations, including the Austin chapter of the Campaign to End the Death Penalty, Texas Moratorium Network, the Texas Death Penalty Abolition Movement, Texas Students Against the Death Penalty, Texas Death Penalty Education and Resource Center, Death Penalty Free Austin, and Kids Against the Death Penalty.
Please go ahead and start asking other groups to sponsor.
11th Annual March to Abolish the Death Penalty
First Organizing Meeting!
Saturday, August 21st at 7PM
Carver Library (click for map)
1161 Angelina Street
Austin, Texas
Posted by Texas Moratorium Network at 12:04 AM