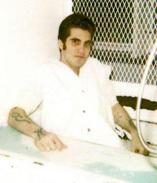 The Austin Chronicle says there is "scant evidence" that Steven Woods killed anyone. He is scheduled for execution in Texas under Governor Rick Perry on Sept 13. This is a case that likely would have a high chance for a commutation to life in other death penalty states, since the physical evidence does not indicate that the person being executed actually killed anyone while there is clear evidence linking his co-defendant as the killer.


"Unless the U.S. Supreme Court steps in to stop it – or the Board of Pardons and Paroles recommends and the governor grants clemency (a remote chance) – inmate Steven Woods will be put to death Sept. 13, even though there is scant evidence suggesting that he actually killed anyone. Woods was sentenced to death for a 2001 double murder in The Colony, near Dallas. After his conviction, a co-defendant, Marcus Rhodes, made a deal with prosecutors, pleading guilty in exchange for two life sentences. Nonetheless, while there was clear physical evidence linking Rhodes to the crime, there was no such evidence linking Woods. "There is no physical proof linking him to the crime," says attorney Alex Calhoun, who has represented Woods on appeal and who has filed a clemency petition with the parole board, seeking to have Woods' sentence commuted to life. That would be far more equitable, he argues; while that is a good argument against sending Woods to death, it's been the argument in two out of the three cases in which the board has recommended clemency under the leadership of Gov. Rick Perry. Perry only granted clemency in one of those (that of Kenneth Foster), and he said he did so because Foster and a co-defendant had a shared trial, not because Foster literally was not guilty of killing anyone.

Meanwhile, Brad Levenson, director of the state's Office of Capital Writs, responsible for representing indigent death row inmates on appeal, late last week filed a final appeal in Woods' case. In the appeal, Levenson argues that Calhoun rendered ineffective assistance when he failed to pursue in a timely manner evidence that one of Woods' jurors was so biased that his presence on the jury violated Woods' right to an impartial panel. (Should the ineffective assistance claim fail, Levenson argues that the presence of the juror alone should render the Woods verdict unsound.) The appeal comes on the heels of the U.S. Supreme Court announcing that it would hear two cases this fall that relate to the right to effective counsel on appeal. Whether Texas courts will see fit to stay Woods' execution until the high court has an opportunity to weigh in on the topic remains to be seen."

Posted by Hooman Hedayati at 12:50 AM