A message from Sister Helen Prejean 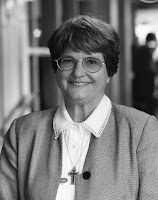 Dear Friends and Supporters of Witness to Innocence:


Over the years I have been asked to write a hundred or more fundraising letters on behalf of many worthy organizations and causes.  I’ve said “yes” to many of these requests and “no” to a handful.  To be truthful, sometimes writing such a letter is a joyous task… and sometimes it is a dutiful chore. When Terry Rumsey, the Interim Executive Director of Witness to Innocence,  contacted me recently and asked me to write a few words and sign my name to a letter asking good folks to make a financial gift to Witness to Innocence, I actually thanked him.  Why? I was thankful that Terry trusted me to find the right words that might inspire someone to write a check – or click on a link on the WTI Web site – for a unique group that I cherish with all my heart.

I admit I feel something akin to a maternal instinct for an organization that was born within our Moratorium Campaign back in 2003 and operated under our fiscal sponsorship until 2009, when it spread its wings and became an independent organization.  Think of that, my friends.  An independent organization composed of and led by exonerated death row survivors.  These were innocent men (and one remarkable woman) who were once branded as monsters, shackled, banished to isolation cells, and wrapped in the cloak of death.  Now, some of them are board members, some are staff members, and all of them are proud members of a change-making organization that has earned the respect of people across the nation and around the world.

It is not, however, based on a shred of sentimentality that I am asking you to make a generous monetary gift to Witness to Innocence.  This is a professional organization that is getting the job done!  Witness to Innocence played a decisive role in the recent campaigns that abolished the death penalty in New Mexico (2009) and in Illinois (2011).  Both Governor Richardson of New Mexico and Govern Quinn of Illinois cited the moral weight of wrongful capital convictions as the primary reasons why they signed legislation abolishing the death penalty in their respective states.  A recent national poll revealed that the risk of executing an innocent person was the most convincing argument for abolishing the death penalty in the United States.

We need these brave souls who faced wrongful execution to continue to speak truth to power, and we need their organization to continue its wonderful job of assembling, inspiring, organizing, and supporting them to be that powerful voice for truth in our society.

Please visit the Witness to Innocence Web site at www.witnesstoinnoce.org to make a donation online.  All financial gifts are tax-deductible.

In closing, let me express my thanks to you for taking the time to read this appeal and for sharing my passion for the amazing work of America’s exonerated death row survivors and Witness to Innocence.

Posted by Hooman Hedayati at 10:00 AM