Austin – Former Libertarian party candidate for President and know candidate for congress in district 10 of Texas spoke on February 12th in Austin at the Alamo Drafthouse Theater to a mixed crowd of proud Texas third party voters, and numerous members of Texas Students Against the Death Penalty. In a symbolic and sympathetic move he signed a petition calling for a moratorium on executions. The event was organized by the We the People Foundation for constitutional Education and included the screening of a documentary by award-winning producer Aaron Russo’s “…From Freedom to Fascism,” 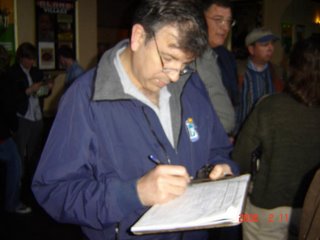 TSADP will ask all the candidates running for Texas governor from every political party to sign the moratorium petition, A few months ago Musician, writer, Jewboy and now gubernatorial hopeful Kinky Friedman signed TSADP’s moratorium petition in . Mr. Friedman covered a wide range of topics spanning environmental issues (when asked what he would do about Hill Country Development he responded “Keep ‘em the hell out!”) to the growing topic of concern - a moratorium on executions. The Kinkster said that his main concern was to focus and to be “Damn sure we won’t execute the wrong guy”. Mr. Friedman went so far as to boldly state he would find an alternative to ’ “Eject ‘em or inject ‘em” policy on the death penalty.
Presented with the petition, Friedman said, “I’ll sign anything but bad legislation” and in both a emblematic and Kinky move signed the moratorium petition, proving that he’s proud to be a man of his word and his beliefs.

Pictures and video of Kinky Friedman signing the moratorium petition are on the website of TSADP.

Find "Your Court Date!" Learn how your views align with those of the members of the highest court in the land. You will be asked to consider civil liberties questions from recent Supreme Court cases, then see which of the nine Supreme Court Justices voted with you on a specific case. Find your "Justice Match" and learn more about the vital issues the Court faces each term.

Posted by Hooman Hedayati at 11:01 PM