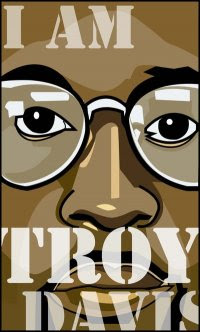 Troy Davis is a man on death row with a compelling case for innocence. No murder weapon, no physical evidence, and 7 of 9 eye witnesses have recanted their testimony. Yet no jury has ever heard this evidence. The 11th Circuit Court has denied Troy Davis' most recent petition and a new execution date may come as early as mid-May.

We're coming out in full force on May 19 so Georgia and the world can show our outrage that justice is still being denied an innocent man on death row. We're calling on Gov. Sonny Perdue and the GA Board of Pardons and Paroles to grant clemency and finally allow a jury to hear the new evidence and recantations. Sponsored by Amnesty International and NAACP.

Help spread the word!
Change your profile picture to the "I Am Troy Davis" graphic used for this event, and update your status to spread the word about Troy and the May 19 rally.

Pass out flyers (PDF) for the event in your group, neighborhood, or congregation:


Participate in the Global Day of Action in your own community! Set up a local event such as a rally or prayer vigil and list it with Amnesty International.
Posted by Hooman Hedayati at 11:47 PM