Sharon Keller Fined $100,000 for Failing to Report Income and Property 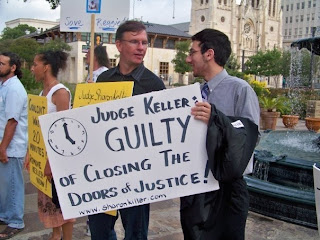 Time to start the final countdown for Sharon Keller's time on the bench. Will she resign or be removed by the State Commission on Judicial Conduct, which will have a hearing on her case on June 18 in response to the complaints filed against her that she has brought discredit to the Texas judiciary by closing the doors of justice to a late appeal by a man set for execution, including one filed by Texas Moratorium Network that was signed by about 1900 people.

Today, she was fined $100,000 in a complaint separate from the ones filed with the State Commission on Judicial Conduct. The fine today comes from the Texas Ethics Commission and has to do with her failure to report income and property holdings.

From the Austin American-Statesman:


Sharon Keller, presiding judge of the state’s highest criminal court, has been fined $100,000 by the Texas Ethics Commission for failing to fully report her income and property holdings on annual personal financial statements.

It was the largest civil penalty imposed by the commission, according to Tim Sorrells, deputy general counsel for the agency.

The statements for 2006 and 2007 failed to list eight properties, valued at around $2.8 million; between 100 and 499 shares of stock; income from rents, interest and dividends totaling $183,000 over the two years; 20 certificates of deposit; and one money market fund, according to a commission order.

Keller also failed to list her participation on five board or executive positions and almost $10,000 in honorariums, the commission said.

Keller’s failure to fully list her properties, largely in the Dallas area, were revealed in articles by the Dallas Morning News and prompted the left-of-center watchdog group Texans for Public Justice to file a complaint with the ethics commission in March 2009.

The commission gave Keller, top judge on the Texas Court of Criminal Appeals, until Aug. 10 to pay the $100,000 penalty.

Posted by Hooman Hedayati at 11:45 AM