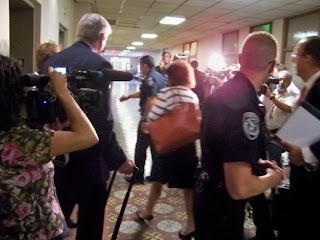 Sharon Keller, presiding judge of the Texas Court of Criminal Appeals, may soon be suspended from office according to the Procedural Rules for Removal or Retirement of Judges, if Travis County Attorney David Escamilla files misdemeanor charges in connection with Keller's failure to report millions of dollars in income and property to the Texas Ethics Commission.

Keller could be suspended by the State Commission on Judicial Conduct upon the filing of misdemeanor charges if the charges relate to her "official duties". The annual personal financial disclosure and reporting requirements are part of most elected officials’ duties, which means a violation may very well be considered “official misconduct,” though some may argue it is not.

If she is suspended, the hearing and formal proceedings against Keller by the State Commission on Judicial Conduct in the separate matter of her actions on the day of the execution of Michael Richard would continue on schedule but she would be suspended from performing her duties as a judge.


I called Escamilla to ask about the status of the criminal complaint, which has now been sitting at his office for more than a year. Escamilla had not yet read the TEC opinion himself, declaring that he'd asked two of his prosecutors to review it and report back to him tomorrow with a recommendation how to proceed.

Escamilla and I spoke both on and off the record. On the record, he said he hadn't moved forward before now because he'd been been waiting for the Ethics Commission to complete its investigation. He said he would give "great weight" to the Ethics Commissions findings of fact and conclusions of law, which would have a "great influence" on whether his office elected to proceed with prosecution. Escamilla was particularly impressed that the TEC identified 13 different alleged Class B misdemeanor violations and said the remarkable volume of violations might also be a factor in whether to go forward.

Click here to sign a petition urging the State Commission on Judicial Conduct to recommend Sharon Keller be removed from office.
Posted by Hooman Hedayati at 3:38 PM