Texas Ahead of U.S. Supreme Court on Issue of Life Without Parole for Juvenile Offenders 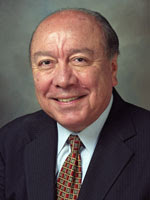 The U.S. Supreme Court banned life without parole for juvenile offenders convicted of non homicide crimes today in a 5-4 vote. This is one criminal justice issue where Texas is ahead of the U.S. Supreme Court, because Texas has banned life without parole for juveniles even in cases in which a juvenile is convicted of a capital crime. Last session, the Texas Legislature passed and Governor Perry signed SB 839 authored by Senator Juan Hinojosa (photo) that banned juvenile offenders convicted of capital crimes from being sentenced to Life Without Parole, instead making them eligible for parole after 40 years.

More than 2,000 juveniles are serving life without parole for killing someone across the country. Those sentences are not affected by today's U.S. Supreme Court ruling.

Here is what The Texas Observer reported about why Senator Hinojosa filed his bill last session:


One of the Legislature’s leading voices on criminal justice issues has decided that teenage killers too young to face execution should also be exempt from being sentenced to life in prison without the possibility of parole.

“To me it’s a matter of fairness and consistency,” said state Sen. Juan “Chuy” Hinojosa, D-McAllen. “If the U.S. Supreme Court said to Texas and all the other states, ‘You cannot give these juvenile offenders the death penalty’ [which the Supreme Court did in 2005], then I believe the state of Texas should not be sending them to prison for life without parole.”

Hinojosa, a long-serving lawmaker who sits on the Senate Criminal Justice Committee (and led the House Corrections Committee during his final years as an eight-term state representative), plans to introduce legislation this session that would cap sentences for youthful offenders convicted of capital murder at life in prison, with the possibility of parole after 40 years behind bars.

Such a sentence would be in line with non–capital punishment death sentences handed down before the 2005 Legislature’s enactment of the life-without-parole law. Hinojosa says he decided to push for the new legislation after reading a recent article in the Observer examining the effects of the law (“The Life Penalty,” Nov. 28, 2008).

That law draws no distinction between offenders who commit capital murder before turning 18 and those who kill as adults.

“I think, for someone so young, there is a chance to rehabilitate their lives,” Hinojosa said.

Four under-18 offenders are now serving life-without-parole sentences in Texas. All were sentenced before the 2007 Legislature required the state’s district courts to report demographic information on capital murder cases to the state Office of Court Administration.

Posted by Hooman Hedayati at 3:14 PM